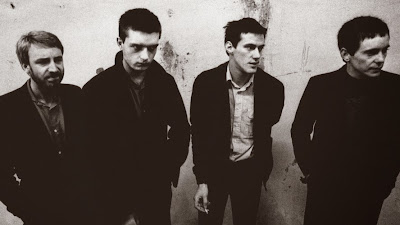 It's Sweet Tooth Jukebox time again, people. Wtf is Sweet Tooth, you're asking? It's this. Who am I? I am this. We good now? Ok, onward to seventies boy band Joy Division, the happy-go-lucky gaggle of young gargoyles above. They were from cheery Manchester, England, and came together in 1976 after two of them--Bernard Sumner and Peter Hook--saw the Sex Pistols play the Manchester Lesser Free Trade Hall. They started life as Warsaw before settling on the name Joy Division, which was apparently the name of a prostitution wing at a Nazi concentration camp. Provocative!

Anyway, Joy Division was once called "the missing link between Elvis Presley and [Siouxsie and] the Banshees" by the NME, which, you know, is perhaps overstating it--at most they sound like Elvis sleepdancing with Bela Lugosi after a particularly blue Christmas. The point is Joy Division was dark. Dark like a basement playroom with black mirrored walls and only a dark blue lava lamp to offer you glimpses of your own debilitating sadness. Or something. What I'm trying to say is Joy Division gave you very few reasons to shake your fist in the air and proclaim "Life is totally worth living I'm going to call my mother!"


But boy did they have some midnight jams. Like my personal favorite, "She's Lost Control," which is utterly unembedable but can be heard here, The song, which is carried along by Peter Hook's bouncy yet droney baseline and Stephen Morris's stiff, robotic drumming, is about a girl having an epileptic seizure, with lead singer Ian Curtis playing the agitated, empathetic narrator. Curtis also suffered from an often debilitating epilepsy (he sometimes had seizures while performing), and his urgent delivery on "She's Lost Control" pretty much proves it. Also, this track is pretty much the sexiest song about epilepsy ever--a bold statement, but a true one.

The band released two studio albums--Unknown Pleasures and Closer--and were officially set for Next Big Thing status just before the release of the second when Curtis hung himself on the eve of the band's first American tour. This, you'll understand, was a stone cold bummer. Two singles were released in the wake of his death--"Love Will Tear Us Apart" and "Atmosphere"--and they are absolute stunners.

"Atmosphere" was actually the first Joy Division song I ever heard. I remember watching the mesmerizing video on 120 Minutes, being hypnotized by those military drums, those chilly synths, and that gorgeous baseline, and then being totally thrown off by Curtis's atonal singing. "Good Lord," I thought, "couldn't they have done a second take?" But it turns out the delicate intimacy of Curtis's vocals--sounding like a robot trying to emote for the first time--completely make sense for the song. It really is the most beautiful track of the post-punk era. Yep, even more beautiful than "Orgasm Addict."


Of course, the surviving members of Joy Division eventually regrouped and continued on as New Order, who over the next decade would show the world that all they really wanted to do was party. But Joy Division is the dark, dusky basement where the party got started, and the band's legend has only grown with time. (Check out the movies 24 Hour Party People and Control for the fun biopic treatment.) A generation of mopey teenagers clasped the band to its breast because they all knew the sad yet somehow comforting truth that no matter how depressed they felt, Ian Curtis probably felt much worse. Teenagers are so tacky.
Posted by Tim Anderson at 5:50 PM