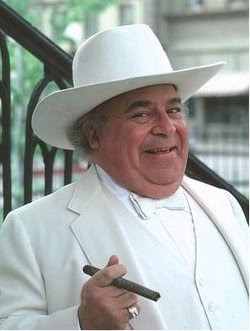 Obviously, most coherent people of the world want Sarah Palin to be the Republican nominee for president in 2012. Not because most folks think that the one thing missing from presidential campaigning is drag hair and screeching. Mainly because the thought of her debating policy in her drag hair and with her screeching seems like it would mean that Obama rollerskates back to the White House easily and Sasha and Malia get to tell Bristol and Willow to suck it. I myself have kind of wished for this.

But you know who would be even better as a Republican nominee? Jowly downhome racist sack of fat Haley Barbour, the governor of (you guessed it) Mississippi. Barbour is a walking talking caricature of the unreconstructed Southern good ole boy, and he would no doubt cut a fine figure (see above photo) next to smoove, sexxy Barry Obama, our Kenyan president, on a debate stage. Barbour is the type of southern dipshit who finds himself uttering REALLY DUMB claptrap about what the civil rights era was like in his hometown of (you guessed it) Yazoo City. Check it. In the past few days Barbour has been all over the news with his revisionist history of Yazoo City's approach to integration during his youth. Now the media is reminding folks that the groups that Barbour defended, the Citizens Councils, were actually not the angels of mercy Barbour claimed but, rather, were founded in 1954 in response to what they saw as the odious Brown v. Board of Education Supreme Court case that found that segregation of public schools was unconstitutional, and Barbour is doing the Backtrack Bolero all over the place. And he ain't a very good dancer.

He is my favorite bubah!