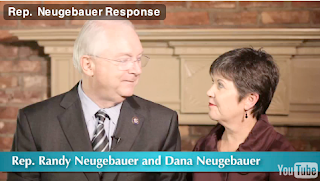 Folks, these two Texans are not only obvious patriots, they are also deeply in love. The silver fox on the left is Rep. Randy Neugebauer, the hero who, for the sake of the country and freedom fries, yelled "baby killer" at Bart Stupak the other day in Congress. The hot momma on the right is his supportive wife Dana (known in Texas circles as Rapid-Eye-Movement McGee). In the wake of the kerfuffle over his announcement of Bart Stupak's new nickname, Neugebauer cut a campaign ad requesting money so he can continue to call people baby killers and whatnot, in Congress, on the taxpayers' dime, in Jesus' name.

In the ad he appears with lovable, twitchy Dana, and I'd like to officially endorse her for her husband's congressional seat and/or President right now. This is a woman who knows how to appear in a campaign ad. She's dynamic! Impassioned! Awake! Her husband should obviously never be let out of the house again unchaperoned, but her? Let her serve openly. Elect this woman and her beady eyes and cotton mouth. Freedom demands that she serve our great nation in some sort of official capacity. ALSO SHE NEEDS MORE COCAINE.

Now, some of the stills in the below campaign video I've made for Mrs. Dana might make you think that Lady Neugebauer has dead eyes. YOU WOULD BE WRONG. Her eyes are alive like danger. She's sending coded messages with those things, messages that will be intercepted by all liberty-loving Americans in Sarah Palin's Alaska.

Absolutely SUBLIME campaign spot. The people who made that demon sheep ad could use your talents....