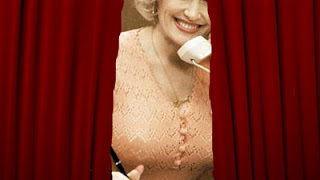 As you all no doubt have already heard (if not dealt with), Dolly Parton's 9 to 5: The Musical closed this past weekend after only about 5 months on Broadway. This is just appalling, obviously. Mama Mia, after all, is still on, relentlessly, night after dreary night, after how many grim years of blanding its audiences to death? Of course, I shouldn't expect the world to understand or appreciate such a brilliant, campy, tacky '80s boob odyssey as 9 to 5, which Dolly wrote each and every song for. After all, the world loved Cats, and that thing was awful and Satanic, was it not?

Well, I wasn't going to take this horrible news lying down, no no no. On Friday night my friend Sarah and I headed straight to the Marquis Theater to show our support for this office musical of our times. I just don't understand why negative critical reception and poor ticket sales have to sink a Broadway production. What about pizzazz, chutzpah, and moxie? Do these things count for nothing in the dog-eat-dog devil's daycare popularly known as Broadway? (Moxie is expensive.) Huh? The curtain was made of curled phone chords, for God's sake. What else do you people want?
---------------- 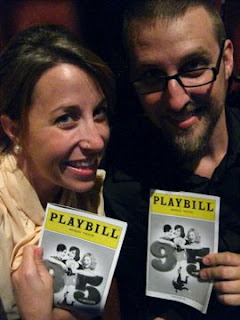 Well, Sarah and I arrived at the show prepared to see an unmitigated disaster along the lines of Lestat or Titanic, the Musical. Sarah was wearing her smartest officewear in solidarity with the three women we would soon see on stage gagging their boss with a handkerchief; and I was wearing Superman Underoos under my H and M slim-leg slacks, in solidarity with what I used to wear when I watched the movie over and over on HBO as a child.

The show was nothing like Titanic. It was fun, in addition to being stupid, and it had Allison Janney playing the Lily Tomlin role. There's really not much more you can ask for. Its closing is a crying shame. But, much like the electric typewriter, this show will not soon be forgotten. 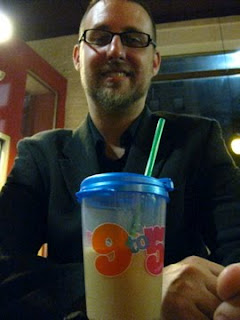 Beverages are much more delicious in an official 9 to 5: The Musical sippy cup. 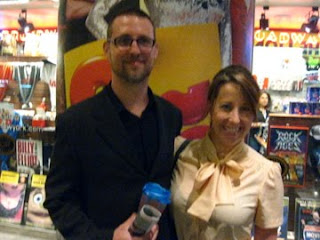 Outside the Marquis in front of a pole advertising the show, a pole that, sadly, will probably soon be advertising the next piece of Disney trash they roll off the assembly line.
Posted by Tim Anderson at 12:48 AM

Email ThisBlogThis!Share to TwitterShare to FacebookShare to Pinterest
Labels: dolly, the theatah

How about Dolly and Disney combined? http://www.youtube.com/watch?v=mpKAA2VxWY8

It was chock full of chutzpah damn it! I am glad we were part of Dolly Parton history! They can never take that away from us!